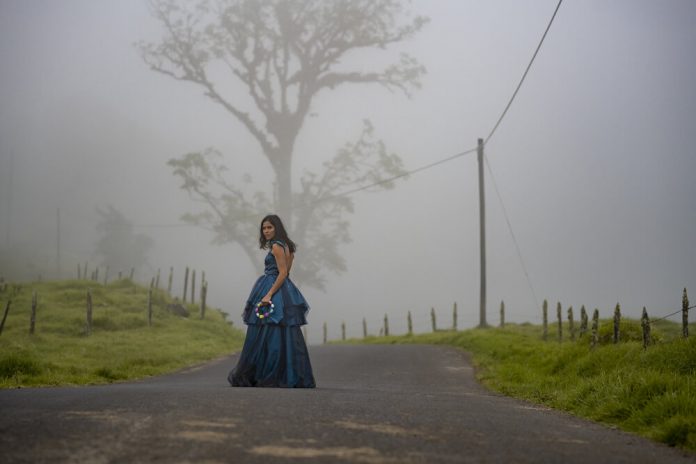 It is unavoidable that “Clara Sola” will be somewhat lost in the sea of films on display in Cannes this year. It is a shame though because it is quite a special piece of filmmaking.

Out of the long list of debuts this year, Costa Rica’s Nathalie Alvarez Mesen’s “Clara Sola” is unquestionably one of the best surprises around, so far, in Director’s Fortnight.

Much of the film’s charm is down to the alluring and mysterious protagonist, Clara (Wendy Chinchilla Araya), a 40-year-old woman cursed with a birth malformation of the spine which controls much of her movements and life. Part of those limitations are also a enhanced by her mother, Fresia (Flor Maria Vargas Chaves), whose disproportional faith and conservatism does not even allow a perfectly affordable clinical operation to improve Clara’s state. Instead, she is infantilized and paraded like a religious attraction blessed by the virgin Mary, attracting many devout believers to her home.

In this sunless existence, Clara spends her days talking to Yuka, a majestic unicorn-like white horse, and anxiously awaiting for significant change in her life. The inevitable change comes with the arrival of Santiago (Daniel Castañeda Rincón), a young man who comes to work in her humble “farm” and begins a process of sexual awakening in both Clara and her young niece Maria (Ana Julia Porras Espinoza).

“Clara Sola” is not an easily categorizable film, with echoes of magical realism, social drama, eroticism, and even horror & fantasy. It works best as a critique of the superstitious small-town Costa Rican culture, drenched in myths and the chains of guilt and sin of Christianity. But its magical elements are not to be dismissed, they provide much-needed color to the misty universe of the protagonist, and are essential to her potential escape.

This dreamlike quality of the film owes much to the brilliant work by DP Sophie Winqvist, whose talent was already on display last year in Ninja Thyberg’s “Pleasure”, and this time around captures the bewildering nature of the surroundings and characters, culminating in what is already a “shot-of-the-year” contender (fireflies never looked so good).

Ultimately, Nathalie Alvarez Mesen’s direction tightens a script that could have easily lost control, offering it instead a discreet sense of perfect balance and elegance, without ever losing sight of its feminine feel and aura. This is a debut that will inevitably cause much anticipation for her future work.

It is unavoidable that “Clara Sola” will be somewhat lost in the sea of films on display in Cannes this year. It is as shy and restrained as its leading star. It is a shame though because it is quite a special piece of filmmaking.