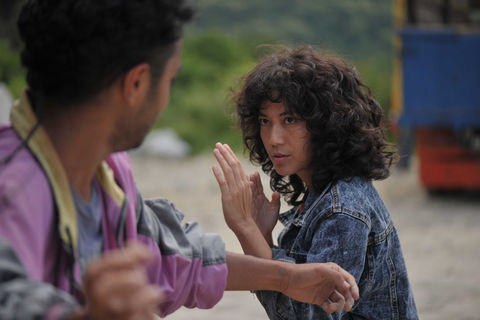 The titles that the Indonesian filmmaker known as Edwin formulates for his films are widely known and appreciated, sort of an art form by themselves.

And after Blind Pig Who Wants To Fly, Postcards from the Zoo and Someone’s Wife in the Boat of Someone’s Husband, the director that the Americans insist on defining as “the Quentin Tarantino of Indonesia” brought to Locarno Vengeance Is Mine, All Others Pay Cash, a brutal action film inspired by the genre cinema of the 80s and 90s.

Based on a book by Eka Kurniawan, this stylized delight with the cinematic and musical DNA of the 80s, set in a country under the Suharto dictatorship, shows us without any form of nostalgia the romance between Ajo Kawir (Marthino Lio), an impotent fighter, and Iteung (Ladya Cheryl, absolutely memorable), an extraordinary woman who is also a master of the arts of combat. Far from a strictly physiological condition, our protagonist’s sexual impotence stems from a trauma which is picked up by her partner in life to start a journey of revenge.

In fact, our main character, Ajo, is impotent since he was forced to watch a collective rape when he was a kid, a situation that affected him permanently and that transforms this film into a socially relevant piece of cinema also with a feminist agenda.

Stereotypical expectations of heteronormativity and sexual strength as a monitor of masculinity are also a strong theme hidden behind a cape of nostalgic fun between love, fights and a lot of slow rock.