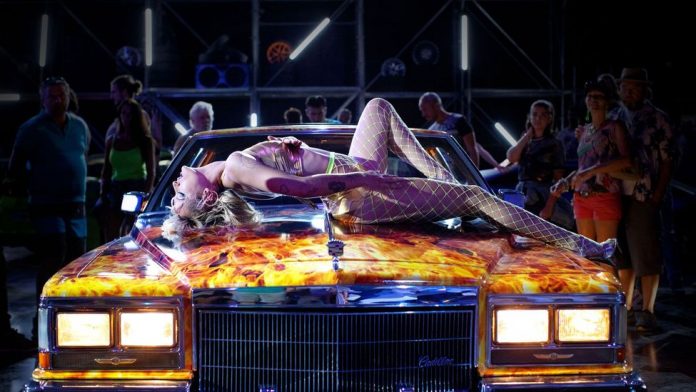 The impact and the bang that Titane (a real cinematic UFO) has caused upon its arrival at the Cannes Film Festival will echo for a long time. Years, maybe. I’m not exaggerating at all, and even if this what-the-f***-did-I-just-watch hadn’t won the Palme d’Or, ten years from now Titane would still be the film from this year’s edition that people would talk about.

Julia Ducournau, who had already gotten some rave reviews when she released Raw, returns in all her strength and glory with a piece of work that mixes Cronenberg’s body horror and Takeshi Miike’s violence and love&death style. We can also mention Shinya Tsukamoto (Tetsuo, of course), John Carpenter (Christine) or even Tarantino, especially because the director shows her thirst for some pop-flavoured ultra-violence and dysfunctional relationships.

Stylistically charged like no other film at the Cannes Film Festival (perhaps just Wes Anderson’s French Dispatch can rival that), this story of a young woman with a titanium plate on her head who poses as the missing son of a firefighter to escape the police is quite remarkable in its visuals (great job by DOP Ruben Impens) and sounds (a carefully chosen playlist of themes).

In the movie theater where I saw the movie, the cheers came up but they were loudly forgotten by the screams and scared eyes of an audience that didn’t know what to do or what to think, especially when our charismatic protagonist, Agathe Rousselle (quite amazing), starts to mess with her own body after becoming pregnant.

In fact, this is the kind of film that the less said the better, but expect the grotesque, the bizarre and the macabre, all delivered by a script that never stops going against conventions and predictability, and by two actors that give their bodies and souls to roles never circumscribed to a binary state of ‘good or bad’.

Titane could easily be seen as a pastiche mess that works as a sort of homage, but Ducournau loves her characters much more than any filmmaker or genre that inspired her, making this a small masterpiece, a stunning and deeply sensory film that essentially hides a psychological drama driven by physical trauma.

In fact, Titane grabs, dazzles and blinds us with all his charisma and style. And the more we think about it, the more we notice its flaws and raw form.

With that, a cult film is born. The birth was painful, but at the same time so glorious and unforgettable that it makes this film truly unmissable.