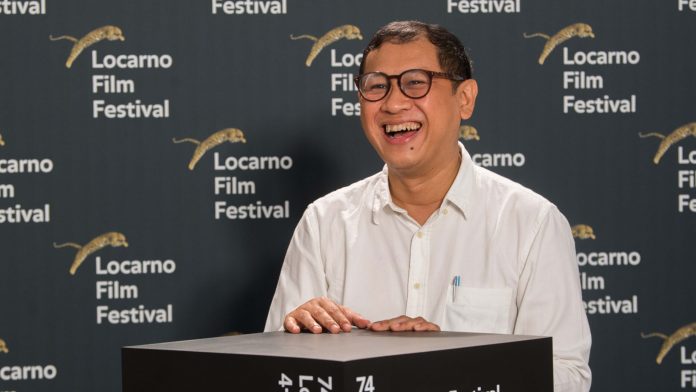 No one beats the movie titles of the Indonesian who goes by Edwin, and after Blind Pig Who Wants To Fly, Postcards from the Zoo and Someone’s Wife in the Boat of Someone’s Husband, the director won the Locarno Festival with Vengeance Is Mine, All Others Pay Cash, a film heavily influenced by the popular action cinema of the 1980s and 1990s that mixes black comedy, drama and romance.

Despite being based on a book, congratulations on the title. In fact, all your movie titles are an art form by themselves (laughs). What led you to adapt this story?

Well, the original title of the book is different from that of the movie. Literally, the title is something like “Like revenge, longing must be paid completely.” It’s a funny and poetic title, but they translated the original book as “Vengeance Is Mine, All Others Pay Cash”, which is also very good. And it references a Japanese book by Ryūzō Saki (Vengeance Is Mine), which Shoei Imamura adapted to the cinema in 1979. I really like that movie.

I read the book very quickly and felt it was somewhere between memories and fantasy, but very grounded when it came to the reality it portrays.

The action of the film takes place in a period of dictatorship. What was it like to build a film that went back to the past but didn’t invoke any kind of nostalgia?

From the beginning, we knew that we didn’t want to get caught up in this nostalgia. My main thought was how to show this era and this genre of films to current audiences in Indonesia, but also in a universal way.

The revenge theme helps, as it is universal… And we have a hero, a fighter, who is unable to achieve an erection.

Revenge is a universal theme, but how to show this revenge, this very human feeling, was my main challenge. As for the character, he was in the book and it was very interesting. Deep down, we have this very macho and tough world, with fighters and assassins. What is the role in this world of a character who doesn’t fit in this world? What is the role of someone more sentimental? And impotent? Impotence is a taboo around the world. Nobody wants to suffer from impotence. Above all I wanted to challenge this particular idea: what if our man, the protagonist and hero, was impotent?

If we think about it, this characteristic is never part of the so-called “macho” universe. By putting the two things side by side, the macho figure and impotence, I automatically created a conflict.

Do you feel that Indonesian society is too macho and sexist?

Yes, and this “machismo” is in our blood, intimately and historically linked to a patriarchal society. The way I would criticize this fact in the film was extremely important to me.

In addition to drama and romance, the action is striking, in particular the silat fight sequences. What was it like to choreograph these fights?

We had a choreographer. If you notice, the actor we see in a moment in prison confronting Ajo participated in The Raid. He is a master and teacher of this martial art. The fight choreographer is his friend.

We have to see that after The Raid a lot of talents and movies of the genre emerged, most of them just about fights. Personally I find it annoying when they focus only on the fights, as it also happened in many movies from that era that inspired us. For me, that wasn’t enough. In a film there must be comedy, romance, drama, etc.

A good practical example of what I wanted is that opening fight sequence. I wanted to turn this fight into something romantic, as if it was also a dance and not just a fight.

And how did you develop that love triangle?

It also comes from the book. The book is very dense and I had to reduce it. We decided to focus more on an ironic love story. And everyone likes a good villain in the middle of it. I improved that character thinking of that.

The texture and grain of the film are quite peculiar and remind us of another era. How was your work with the director of photography?

From the beginning I said to my co-producer (and friend) that I wanted to work with someone outside Indonesia. I wanted to shoot with Kodak 16mm, challenging ourselves. That fact immediately attracted a lot of people. We were very lucky to work with Akiko Ashizawa. I love her work. She is a legend and has worked with directors like Kiyoshi Kurosawa.

She has done dramas, horror. She is very fluid in the film genres she works with. She handles the storytelling well and visually translates it all in a very artistic way. We talked a lot about popular culture and she gave us a lot of tips about color, composition, etc.

Can you talk a bit about the film musical choices?

As with the movie references, this period was marked by many themes that we call slow rock, local things like AC/DC but not so good, mixed with some melancholy with an Asian tone. They are very popular in the region.

Americans insist on giving filmmakers some curious nicknames. For example, what do you think of them calling you “the Quentin Tarantino of Indonesia”?

To be honest, I don’t care about that. It’s just a way of introducing us to a territory that is not ours.

How important was it for you to show your film in Locarno?

It means a lot to me after being locked up at home for nearly two years due to the pandemic. I almost gave up on cinema because the pandemic closed everything down. Having the film here in Locarno, at a festival that celebrates cinema, gives you energy, strength and an audience. And it gives you hope. In Indonesia I have had a very interesting response from the public, as they want to see it as soon as possible.