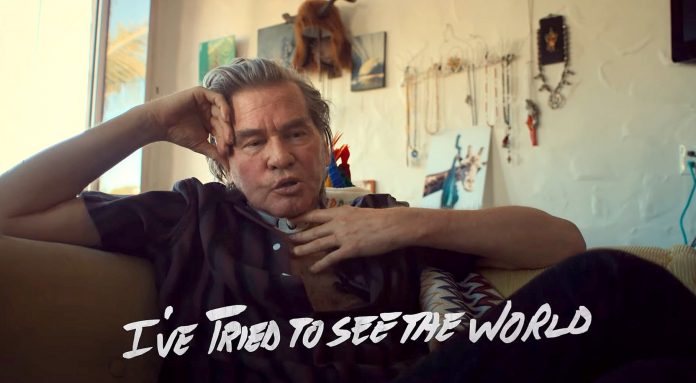 If you expected the much-anticipated revelation as to why Val Kilmer “disappeared”, think again. Yet, whatever bitterness that may cause, you’ll be swiftly reminded of Kilmer’s unquestionable charm.

One of the most eagerly awaited documentaries of the last few months has finally hit the Cannes coastline with a bang, Amazon’s “Val” by Ting Poo & Leo Scott, a look at the life and career of American actor Val Kilmer. The anticipation was fuelled by one of Hollywood’s greatest unresolved mysteries: whatever happened to Val Kilmer?

The actor had been true Hollywood royalty, banking several successful roles and accolades in the late 80’s and early 90’s, in major movies such as Tony Scott’s “Top Gun”, Oliver Stone’s “The Doors” and Philip Noyce’s “The Saint”. The honor of succeeding Michael Keaton in the role of Batman, in Joel Schumacher’s notorious “Batman Forever”, quickly revealed itself as a curse, and marked a shift in his trajectory. After several obscure roles, he simply vanished into oblivion.  “Val” was supposed to be his version of what happened, and it promised to be spicy hot full of details, the true stuff of Hollywood legends. Unfortunately, and sadly, “Val” is nothing of the sort.

Instead, we are treated to the customary chronological voyage of his experience in his most recognizable roles. That alone is not necessarily problematic since the nostalgic trip is not without its hilarious and endearing moments (all you need is a short clip of “Top Secret” to cause a chuckle through the room). Fortunately, Kilmer was frequently armed with a camera while he was working, and the film uses his archive footage without much discretion, colorizing this voyage with many memorable moments.

The film does diverge into other grounds though, including his childhood, but most notably into his marriage to actress Joanne Whalley, and the birth of their two children. His son in particular ends up playing a vital role as narrator, since Val Kilmer has fallen victim to throat cancer and is unable to speak fluently.

As you witness all of this you can’t help but remember how charming Val Kilmer once was, even though, as the film approaches the moment to deal with his great absence from the scene, you are surprised with a short montage that barely scratches the surface. There is no revelation, there are no notable details. And by the end, you can’t help but feel it is a documentary booked on demand, Kilmer’s final attempt to clean his image, just when he is at his most fragile moment.

If that is the case this may be one of the few times it is not a problem at all. Regardless of how difficult he may or may not have been, he will always be an icon and a sympathetic figure to most of those who grew up in the 80’s and 90’s. The final result is not enough, it is destined to leave you shorthanded, yet, and bizarrely, it is still a satisfying watch.