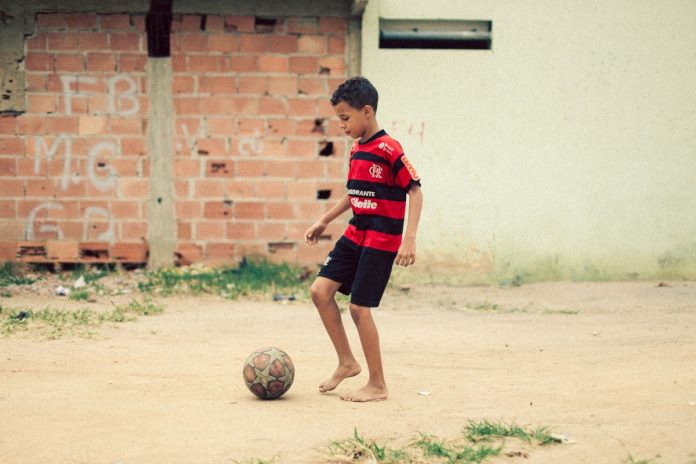 Tribeca (June 9-19) spotlighted dozens of films from around the world, including a delicate look at the daily life of a young boy in the suburbs of Rio de Janeiro: Alec Cutter’s Nando.

Narrated by Seu Jorge, this documentary with poetic tones records the dreams of Luis Fernando Fernandes with a metaphor between a caterpillar and a butterfly that takes us to Rio de Janeiro’s violence. It’s a Brazil-Chile-USA co-production in which Fernando, who lives in Mangueira, dreams of seeing a Flamengo soccer game at Maracanã stadium. The editing gives this short film a unique style.

In the following interview, Cutter talks to C7nema about the route that led him to Fernando.

How did you arrive at Nando and how do you evaluate the cocoon where he blossoms?

We found Nando at an NGO school in the Mangueira Favela called ‘Estrela da Favela.’ He was such a kind and soft-spoken kid. Due to this humility I felt like he had the purity and innocence to connect with audiences in a very profound way.

For many of these kids, their world is very small and therefore I feel like the true significance and the message of this movie is that these kids and their dreams are valid and they do belong to the beauty of the world. They belong inside the Maracanã and be a part of football. I don’t want them to see themselves in a different way. Again, this film was never just about football but rather to give a sense of belonging to these children whose views of the world have been shortened.

How was the production? How many people? How much did it cost? Where was it shot (locations)?

The production was very difficult due to shootouts constantly breaking out in the Mangueira favela. We had to wait many months for tensions and conflicts to calm down before going back to work. This created a 6-7 month process of filming.

The team consisted of myself (Director, Co-Producer, Cinematographer, Editor) and Igal Albala (Producer). We also hired individuals from the favela to help. Both Igal and I did not pay for this. Instead we used all of our ‘production costs’ to help the children in this community, such as renovating the school (‘Estrela da Favela’) and donating food baskets to many families inside the Mangueira favela. The entire film was shot in the Mangueira Favela and in the Maracanã.

What does the Maracanã stadium still represent nowadays?

I believe that when football is at its best, it remains a people’s sport. Therefore, the Maracanã can represent a space in which people of all backgrounds can come together and bond over a common passion. It is a beautiful experience to feel the crowd and the history of the Maracanã – and I believe it’s something that everyone should have a chance to do. Football and the Maracanã are at their best when they can be felt by children like Nando.