Michaela Pavlátová’s ‘My Sunny Maad’: “It will be impossible to show this film in Afghanistan” 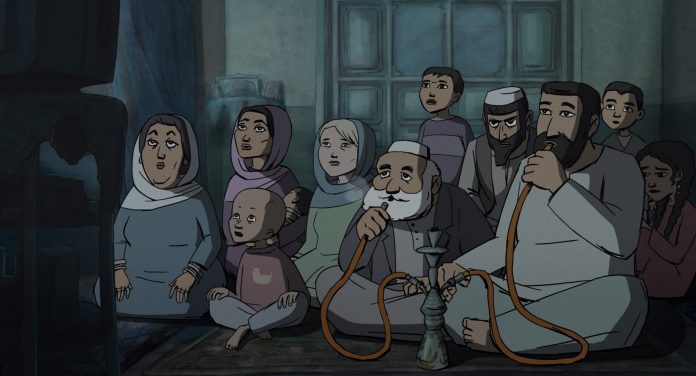 The first animation feature film by Michaela Pavlátová (Oscar-nominated for Words, Words, Words, Golden Bear winner for Repeat, Annecy Cristal for Tram) takes its inspiration from the novel Frišta by Czech writer and journalist Petra Procházková. My Sunny Maad follows a Czech woman who falls in love with an Afghan but has no idea what awaits her in a post-Taliban Afghanistan. The film won the Jury Prize at Annecy.

Speaking to C7nema about the movie, Pavlátová explained what took her to work in this adaptation: “At some point in your career you feel that you should go somewhere further. Before this I made several shorts and two full-length live action feature films that were completely different from my animation work, not only in technique but also in tone. When I started thinking about what I would do next, iI had no idea for an animation film. I think Short format is the best for animation, but I thought I should change, although I’ve been saying all my life that I wouldn’t make an animated feature film. I originally wanted to make a movie about a different theme and to write the script. I spent quite a long time working on that, but then I came to the conclusion that I couldn’t. It was a surprise to me, I felt depressed about it and decided it was easier to find a script already written or a book to adapt. Also, I wanted to do something that went beyond the world of animated film, because in a way I feel it’s a bit of a closed circuit. So I wanted to make an animation where the story was the main thing and not the animation itself. And I wanted a story that I would like to see, with a strong female character.”

Pavlátová was on a train when she read the book and immediately fell in love with Herra, the main character who follows her husband to Afghanistan. Although the filmmaker had no attraction to that country in particular, she found Herra’s relationship with her husband very interesting to follow. “That’s why I chose this book”, says  Pavlátová. “My producer already had this script, but it was planned to be a live action movie. It was something very different from what I have done in the past. My previous works were more ironic, more humorous and even more stylized. This time I wanted to serve and respect the script, to serve the story. I wanted audiences to go to the cinema and even forget that this is an animation film.”

In recent years there have been some animated films set in Kabul (The BreadWinner, Swallows of Kabul), but the director says that when she started working on My Sunny Maad she didn’t know anything about them. “When we started working five years ago I had no contact or knowledge of any animated film set in Afghanistan. When we were already with ⅓ of the work done, we started to see that there was ‘The Breadwinner’, ‘Swallows of Kabul’. At the time, we thought about stopping and doing something different, but we were already advanced a lot. Also, I felt very attached to the main character, Herra. She became to me like a real person, a friend. I felt I had to bring it to life, that I couldn’t stop”.

Although she had not seen the aforementioned films at that time, she had to deal with two realities in production. The first one was how to make her “punk” and freestyle more universal and the other one was to learn how to work with a team: “Originally the style was more sketchy, more free. I always made my films alone, and suddenly I had to work with a team. That was tough and challenging as it was hard for me to accept what they were showing. If you give characters to animators and ask them to draw them in a sketchy way, you have to think that sketchy is different for everyone. Initially the designs were more sketchy, but the story was very realistic so the style had to follow. For a year I designed the characters, getting feedback from others, but the producer was very generous and tried to find a solution, going more in line with my style. And that’s what we did. I worked things out my way and then simplified it so that others could work on the characters, movements and backgrounds (which are very simple), fulfilling the production and post-production timings.”

Those familiar with the Czech artist’s previous work, such as Tram, are well aware that sex and spicy elements are frequent themes in Pavlátová’s work, but in My Sunny Maad things were quite different. This does not mean that sex does not exist in the film, and there’s a particular scene that might drive some distributors away from the project. “It will be impossible to show this film in Afghanistan, with or without that sex scene,” the director told us, adding that another scene – in which Nazir cuts his leg to drain blood onto the sheets, pretending that his new wife was a virgin – might be “problematic” to show to a younger audience.

Aside from directing, Pavlátová is also head of the Animation Department at FAMU (Film and TV School of the Academy of Performing Arts in Prague). “I am a very proud teacher”, she says. “Two years ago we had in Annecy the winner of the Crystal for Best School Film, Daughter, by Daria Kashcheeva. This year we have ‘Sisters – Sestry‘, by Andrea Szelesová, also in the competition. I’m here in Annecy as a director, but also as the proud mother of these films”.

Being head of the animation department at FAMU “is a lot of work” and to build My Sunny Maad, Pavlátová had to give a lot of attention to it: “When we finished ‘My Sunny Maad’, I found out that I wanted to continue in animation. In a long format. This time I have a particular story to follow, one of a woman who was born as a man and becomes internationally famous for it. It’s also a 20th century story, as she was a Vaudeville artist. The film will be about her, the theaters, Vaudeville. Anyway, I want my next film to be very colorful, very funny, the opposite of this one. But we have to get a good story. I never thought about it much in the past, but now I do: a good story is the basis of everything. Me and my producer are working slowly on this project and we are still at the beginning”.